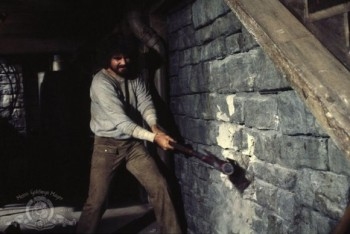 True Story horror is front and center with the Conjuring I decided to tackle those creepy dwellings where things go bump in the night. These could be ghosts, or they could just be possessed houses that are pissed off for reasons of their own. The only steadfast criteria is that they must take place within a single dwelling and the events must be confined to that place. Roaming ghosts (The Grudge) need not apply. In any event, it’s not safe to stay in these moody houses even on a dare. So get under the covers and turn on all the lights. Here come the:

10. The Ghost and Mr Chicken (1966)– This Don Knotts film may very well be classified as a comedy, but there were several scenes that gave me the out and out willies as a kid. If you have never seen this movie, check it out. Don Knotts is a certified scaredy cat as well as a typesetter for his small town newspaper. But he longs to be a reporter so he is sent into the Simmons house to spend the night in the location of a murder/suicide that took place 20 years earlier. He will find his courage along with the solution to a mystery that has plagued this little town for so long. And just maybe, he will find some ghosts along the way.

9. This House Possessed (1981)– This TV movie isn’t exactly what most people think of in recent years as far as haunted houses go, but this is exactly what I most had in mind when I came up with the idea for this list. A rock star (Parker Stevenson) on the verge of a nervous breakdown is ordered to get some rest. Little does he know he house will fall in love with him, for lack of a better term, and go on a murderous rampage to stop anyone in its way. It’s a little bit of cheese but a whole lotta fun. I used to look forward to catching this one on late night TV back in the day.

8.  The Amityville Horror (1978)- Everyone is familiar with this film and it still stands in my eyes as one of the creepiest haunted house movies.  The Lutz family moves into an ideal home only to find out there are reasons it sold for so cheap.  Reasons to die for.

7. The Haunting (1963)– Based on the popular novel, The Haunting of Hill House by Shirley Jackson, this film goes to show that some mysteries are better left unsolved. And some phenomena are better left without investigation. Dr Markway wants to prove the existence of ghosts, but he may be rethinking his decision to do so in this house…if he lives through it. An inferior and unnecessary remake was released in 1999.

6. The Others (2001)– In this creepy thriller, Nicole Kidman is a woman who lives in a darkened house with her two children who are sensitive to light. She becomes convinced that her home is haunted, but is it? And if so, who are the ghosts?

5. Burnt Offerings (1976)– Karen Black and her family (including Bette Davis and Oliver Reed) rent a Summer home that seems like the perfect place for rest and relaxation. They have no idea exactly how restful this house wishes to make them. They might just be relaxed to death. This movie contains all the atmosphere that you can stand plus some. It may not be very fast paced, but it does not fail to deliver. It’s obviously one of my favorite possessed house films.

4. The Legend of Hell House (1973)– Richard Matheson penned the screenplay based on his own chilling story. A team is sent in to prove or disprove survival after death. The only question is whether or not they can survive the experience. From the man who brought us such classics as I Am Legend and Prey, how could you expect anything but greatness?

3. The Changeling (1980)– Digging up basements long before Kevin Bacon unearthed his back yard, George C. Scott moves into a mansion after the untimely deaths of his wife and daughter to discover that his own ghosts are not the only specters he has to be concerned about. This film is a true classic of haunted house horror that chills from beginning to end.

2. The Shining (1980)– Released the same year as the above, The Shining is based on the novel of the same name by horror master Stephen King (as if you didn’t know). Though it departs from the novel quite a bit, it manages to hang onto the basic idea that strange things are afoot at the Overlook Hotel. Jack’s son Danny along with Dick Halloran of the staff share the unique ability to “Shine.” When the shit goes down, Danny and his mom (the wispy Shelly Duvall) are forced into fight or flight for survival from the author (Jack Nicholson) turned Psycho at the whim of the very building they are hired to oversee.

1. Poltergeist (1982)– Oh crap, “they’re heeeere.” During a vicious storm little Carol Anne goes missing and her parents are dismayed to discover she has been taken by the spirits inside their very own home. Worse, her father is an agent for the very developer that “didn’t move the headstones.” Tobe Hooper’s classic haunted house film has quite a different feel from his breakout film The Texas Chainsaw Massacre, but the element of horror is very much alive within this other iconic creation. Poltergeist set the tone for horror of the eighties as well as it perfectly captured the desire of the American yuppie to live in the suburbs in excess, as quickly as possible, cutting corners wherever they may. As much a cautionary tale as a horror film, Poltergeist warns us that a lack of respect can cause collateral damage down the road. Oh yeah and it’s pretty damned scary to boot.

Saturday the 14th – Yes this film is another comedy, a spoof in fact, but no other house has ever managed to unleash the amount of crap on its unsuspecting tenants than this one has. It is funny but it is also quite dark. Lampooning numerous films like Jaws as well as the similarly titled Friday films, this movie is a must see for true fans of horror. If you don’t get all the references, you have more watching to do.

Monster House– Receiving a mention because it is really a cartoon aimed at children, this film maintains its share of spookiness. And if you happen to be “enhanced” while watching it, it has the ability to scare the crap out of the most hardened grownups at times. Very well done.

13 Ghosts (remake)– While I do adore the effects in this film as well as the stories behind each of the titular 13 ghosts, I was severely disappointed with the story and felt that the end of the film shot itself in the foot. I do feel a need to mention it, though if only for the ghosts themselves.