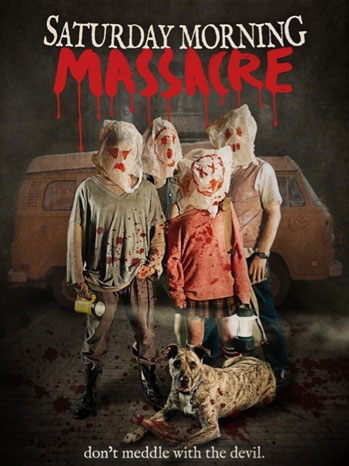 I’d originally heard about Spencer Parsons’ Saturday Morning Massacre last year via various news sites and reviewers as it made the rounds a few film festivals. The premise sounded interesting enough: a team of paranormal investigators, complete with dog a la The Mystery Gang, go around trying to debunk potential hauntings and the like only to be confronted with the real thing. As anyone with a working knowledge of Scooby Doo can tell you, the monster or haunted house or whatever was nearly always revealed to be some crook or codger trying to make money on a property or some such. After all, it was on Saturday mornings and was a kids show. So the idea to take that setup and make the monster or ghost a real thing seemed awfully clever. Add in the potential horror element and I figured I had to see it at some point. The Austin Film Festival (a conference and film making program) started an ‘Audience Award Series’ this year to screen favorites of all kinds from previous years’ festivals throughout the year. The first of these was Saturday Morning Massacre which screened at the Alamo Drafthouse Village this past Monday with Mr. Parsons and some of the crew and actors in attendance. The film starts out with our group of investigators looking into a haunting only to discover that it is not in fact a haunting (a throw to the Scooby Doo setup) but a cover up for child pornographers. But instead of a laughing, happy scene with police, the team is reamed by a couple detectives for blowing their sting operation and screwing up their investigation. I thought this was a good way to segue’ into this being a much more harsh world for them to work in with real consequences. No cranky old men with rubber masks. A scene follows in a restaurant that lays out that the team is spread very thin money-wise and is scrambling to have some sense of forward momentum. There are hints as to cracks in the team’s dynamic and possible past relations, betrayals etc beyond just being broke. At the restaurant (as one of the character’s credit card is declined) they get a call for a job to rid a house of, or uncover the reason for haunting claims. A real estate developer has taken possession of the house and needs to remodel and sell it quickly but this ‘haunting’ issue must be taken care of first. Pretty simple. Traveling to the mansion, the team’s bus breaks down (an argument breaks out about the engine, tensions raise) and while trying to figure it out, a county police/sheriff character stops to aid them. I highlight this because Officer Lance (Paul Gordon) is by far the funniest aspect of the film. His dry delivery and complete lack of trying to be funny makes him freaking hilarious. This was a very smart choice on the filmmakers’ part because trying your damnedest to jam jokes into horror films generally flies like a lead balloon. Thankfully, Gordon’s performance is pitch perfect and adds a great bit of levity to the proceedings. His arrival also inadvertently causes the ‘Shaggy’ character to hide his stash which has serious consequences later at the mansion. Officer Lance accompanies them to the property and gives them a tour (chance for more great, deadpan lines) and leaves them there after explaining the history of the house, the Kyser family that owned it, their sad downfall, their children and all else. Once the team sets up to work and Officer Lance leaves, things start to go all manner of wrong and go even worse when the true horror of the house reveals itself. In its second half, the film is essentially a survival story and unfortunately, this members of this team aren’t really useful in terms of survival. They bicker and fight with each other, breakdown easily and don’t see the danger they are in for a number of reasons. This makes the heightened tension and suspense of the latter part of the movie frustrating because it doesn’t seem like this bunch can do much of anything right. You’re hopeful for them, but, you know better. Anyone who has seen enough of these type of horror movies can figure out who’ll make it and who won’t, but, don’t let that lull you to sleep. Some truly stark unpleasantness can be found in how they isolate themselves, how they treat their work and each other and when the proverbial shit hits the fan, it is more the horror of human breakdown than it is attacking monsters or ghosts or mutants that potentially does them in. I would have liked more screwedupness when it came to this aspect, and, if they’d pushed the grindhouse aspect a little more (save for the very end which is damned cool) but on the whole, it was a fun time. I got a chance to speak with director Spencer Parsons after the screening and understood that they are working on VOD/DVD channels right now so this should actually be available to see here pretty quickly (with a possible title change). Seek it out as it does turn the slasher sub genre in a slightly new direction instead of in on itself for the 1000th time. 3.5 / 5 stars

AddThis Sharing ButtonsShare to FacebookShare to TwitterShare to PrintShare to More