I Love a good Gothic Movie, but most of them were filmed in the 30s to the 70s.   So I started to wonder are there any good “Modern” Gothic Horror movies? After searching my Dvd collection and looking around on the internet, I have come up with an interesting list…It seems there is a trend of new Gothic movies coming soon. But, for now I will have to include the 90s as part of my list, because they really are some fantastic films from that decade.

The most interesting thing about some of these movies is that my Non-Horror friends have seen most of them, which makes me think they have a bigger audience than most Horror films do. I remember talking to a friend about movies recently, She said that she had never seen any Horror movies because they would give her nightmares.

I thought ok, we’ll talk about other genres then. It soon came out that she loved Bram Stoker’s Dracula, Interview with a Vampire, and the new Fright Night. I said really?…well then you have seen at least three Horror movies. Interestingly, she had never thought of them that way. I don’t think I convinced her to watch anything scarier right then, but maybe she will warm up to them in the future? There is just something about a period film that Women love… Maybe it’s the costumes and sets but I think truly it is the Romanticism. We all adore a good love story, even if it is about an evil blood sucking Vampire! And no I don’t mean Vampires that sparkle… just good old fashioned Bloodsuckers!

So here is my Top Ten list of Contemporary Gothic Movies…

Francis Ford Coppola’s version of Bram Stoker’s Dracula is one of my favorite films. Jonathan Harker travels to Transylvania to conduct a business transaction with Count Dracula. The Count sees a picture of Harker’s fiance, Mina, and believes she is the reincarnation of his true love. Dracula travels from Transylvania aboard a ship to London to find Mina. When he arrives, he seduces and bites Lucy, Mina’s friend. Lucy starts to fall ill and her fiance summons Dr. Van Helsing to help. Van Helsing easily figures out that Lucy has been bitten by a Vampire, and they try to prevent her from being attacked again.

Bram Stoker’s Dracula is a beautifully romantic Vampire movie. Winona is lovely in her gothic dresses and the sets are amazing. Gary Oldman plays Dracula very dramatically and effectively. This version is not very scary, but I love it for the visual feast that it is.

The Vampire Lestat seduces Louis, a young plantation owner, into becoming a Vampire. They are forced to flee the plantation when the slaves become aware of what Monsters they are. Louis and Lestat flee to New Orleans where they find and turn a young girl named Claudia into a Vampire. Louis is tortured by his guilt of killing people for blood.

Brad Pitt and Tom Cruise are undeniably sexy as Vampires, but the real star of the movie was Kirsten Dunst as little Claudia. This is one of those movies I enjoy watching over and over again. Even though Interview With A Vampire isn’t very scary or gory, it is very entertaining none the less.

Ichabod Crane travels to the small Hamlet of Sleepy Hollow to investigate a series of murders. The villagers seem to be turning up headless all over the place. Ichabod arrives with his bag of strange instruments and goes to work at solving the murders. He seems to be a little squeamish for a Coroner though. The townspeople tell him there is a Demon hunting them but he doesn’t believe them until he sees the Headless Horseman for himself.

Sleepy Hollow is directed by Tim Burton and is wonderfully Gothic. He has his usual line up of quirky characters for the villagers from Sleepy Hollow.
Johnny Depp is charming as Ichabod Crane and Christopher Walken is really frightening as the Headless Horseman. I always enjoy the sets on Burton’s movies, because he uses a lot of detail to set up the atmosphere. Even the carved pumpkins have his trademark look to them.

The Corpse Bride is an animated movie by Tim Burton. Victor and Victoria are arranged to be married by their parents. The two meet for the first time the day before the wedding. The wedding rehearsal goes badly for Victor and he decides to take a walk through the woods in order to practice his vows. He accidently slips a ring on to the corpse of a bride, thinking her finger was a twig. Victor is immediately whisked away to the land of the dead and he must figure out a way to get back to the living.

The magical and macabre worlds that Tim burton comes up with are best done in this stop motion type of animation. The story is wonderful and imaginative with a mystery to solve. The characters are loveable and memorable played by Johnny Depp, Emily Watson, and Helena Bonham Carter.

Hammer Films returns to Gothic Horror movies after 30 years with the Woman in Black. Daniel Radcliffe plays a Lawyer, Arthur Kipp, that goes to settle an estate after the death of a Woman. She lived on a remote Island that has only one road leading to it. The road only appears when the tide is out, so it is easy to get stranded on the Island. Arthur decides it is best to spend the night on the island in order to finish his work quickly. The House is haunted and Arthur starts seeing strange things almost immediately.

The Woman in Black has that Gothic Hammer feel to it that fans of the classics will love. It delivers lots of thrills and scares with loads of atmosphere. This movie is in no way a remake of the 1988 TV movie, but instead another version of the same story. The film is dark and scary and reminded me most of one of my favorite Ghost stories…The Changeling. The set design really stands out in this film, as the house is really eerie with lots of cobwebs and creepy old toys.

From Hell is set in the Whitechapel area of London during the Jack the Ripper murders. Prostitutes are being killed brutally on the streets of London. Their throats are being slit and then they are disemboweled. Quite often some body parts are missing as well. The murders are extremely savage but precise, leading Detectives to think the Prostitutes are being murdered by a Surgeon.

Johnny Depp stars as a Police Inspector who starts to uncover a larger conspiracy surrounding the murders. He starts to fall in love with a prostitute named Mary Kelly and tries to rescue her from the Ripper. There is also a 1988 TV version of this movie starring Michael Caine, which it is definitely woth checking out as well.

The Province of Gevaudan in rural France is being terrorized by a mysterious Beast. The local peasants are being attacked by the Beast. A knight, Fronsac, and his companion, Mani arrive to try and capture the beast. Mani is a priest from the Iroquois tribe and uses his knowledge to help capture it. The movie is based on the true story of the Beast of Gevaudan that reputedly killed many people in 18th century France.

Brotherhood of the Wolf has beautiful scenery and sets. For a period film, there are lots of martial arts fights to be enjoyed. Beautiful period costumes and a little bit of romance too.

Sweeney Todd is set in turn of the century England. A barber, who lost his wife and child, returns to London to seek revenge on the man that took them away. The Barber teams up with a woman who owns a shop that sells meat pies. She comes up with a plan to use corpses for the meat in her pies, and asks the barber to supply them for her.

A Musical Horror Movie…now that is unusual. Don’t be fooled by the nice musical medleys, at it’s core Sweeney Todd is about a Serial Killer who uses the corpses for Cannibalistic purposes. The movie has a nice mix of humor and the macabre.

Universal studios tries to bring back one the classic monsters…The Wolfman. Benicio Del Toro plays the tortured man, Lawrence, who is bitten and cursed by the Werewolf when he returns home for his brother’s funeral. A police Inspector arrives to investigate the recent murders in Blackmoor and suspects Lawrence is to blame for them.

The set design and costumes are really well done. This newest Wolfman is a decent remake and is entertaining but it certainly is not the best version of The Wolfman I’ve seen. I would recommend the 1961 Curse of the Werewolf instead.

The Phantom was abandoned as a child and put into a basket to float into an underground river. The Phantom ends up being raised by Rats instead of Humans and likes to hang out in the Catacombs under the Opera. He hears Christine sing and falls madly in love with her. He will do anything to get close to her including Murder!

Not quite Argento’s best work but it has some beautiful scenery in it. The Phantom, played by Julian Sands, doesn’t wear the trademark mask. I think it might have been better if Argento had stuck to the usual Phantom that is disfigured. Dario Argento’s beautiful daughter, Asia, plays Christine.

So there you have it,  a list of my favourite Contemporary Gothic films or otherwise known as a list of movies that women will love! 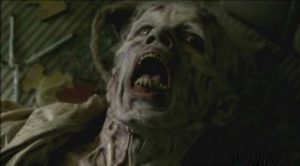