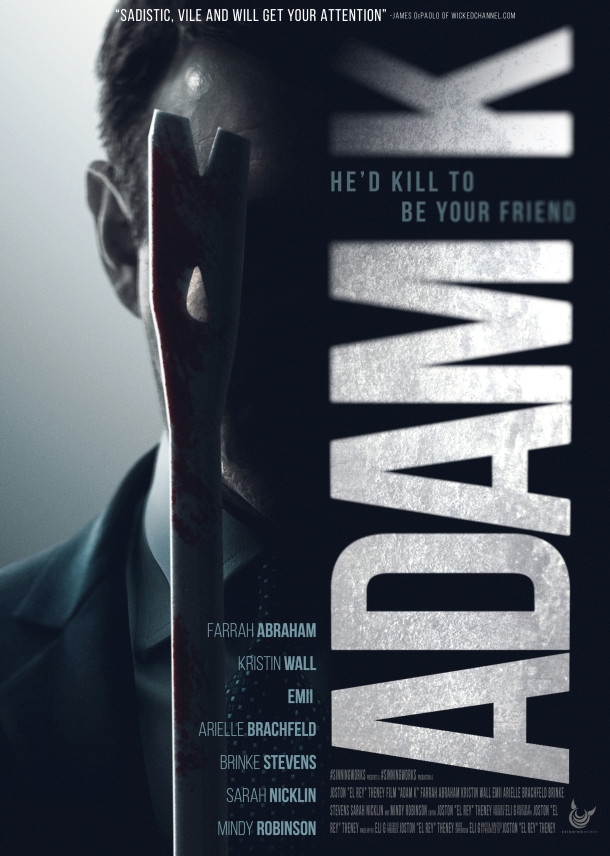 Joston Theney is certainly no stranger around these parts especially with his slasher flicks Axeman and Axeman 2: Overkill, but what brings his name to our attention today is his latest offering, Adam K. It’s a little different from his previous efforts as it comes off more as a thriller, but it still has that slasher vibe about it.

The film centers on Adam Kraul, who witnesses a tragic moment in his life as a child when two horrific murders occur in his own home and in turn, these events leave a lasting impression on young Adam, for which he will never be the same again.

Skip forward several years and Adam is now a young man working as an auto insurance claims manager, living what looks to be a normal life. He has a job, an apartment and things seem to be going well, at least on the surface. Sadly for Adam, he is a social awkward loner, certainly something I can relate to, as he struggles to interact with others. But, there is someone he has his eye on and that is his young neighbor Amanda (Sarah Nicklin), but sadly he can’t find the courage to speak to her as any interactions come off as awkward.

But, all is not lost, Adam befriends a man named Michael (Edward Gusts), who he bumps into one day and quickly becomes attached to him, but being the awkward guy that Adam is, he learns of Michael’s troubles and feels the only way to show his friendship towards Michael is to right the wrongs that have occurred to him and that involves murder. But not just any murder. Nope, that wouldn’t be Adam, instead he goes on a brutal killing spree and slowly things begin to unravel, there is much more to Adam than his heinous upbringing.

The film chugs along at a steady pace, although at times I felt it chugged a little too slow. I’m all for a slow-burner, but times I just wished the pace picked up a bit.

The acting for the most part is good, however, there are times when the reaction of some of the characters are underwhelmed, especially on the discovery of a man with an inch bullet hole in his head. Also, another scene is when one of the characters are impaled through the back for what appears to be in the kidney region, and the character just seems to walk it off. I just wished there was a little more realism to some of these scenes.

But, all is not lost as the actor who plays Adam, is an absolute beast. He pulls off the character so well and of course steals every scene he is in. He really is a joy to watch as he makes Adam the crazed lunatic that he is.

Another nod goes to some of the special effects on hand, particularly the practical effects as they certainly look convincing enough, I just wished that some of the actors were able to do them more justice.

Still, Adam K is an interesting ride with a few twists, it’s not perfect but I can certainly see Joston evolving as a filmmaker and that is always great to see. It will be interesting to see him expand on this as the potential is certainly there. If genital mutilation, blunt-forced killings and a crazed serial killer are what you’re after, give this one a look. It’s a brutal look into the mind of a killer.