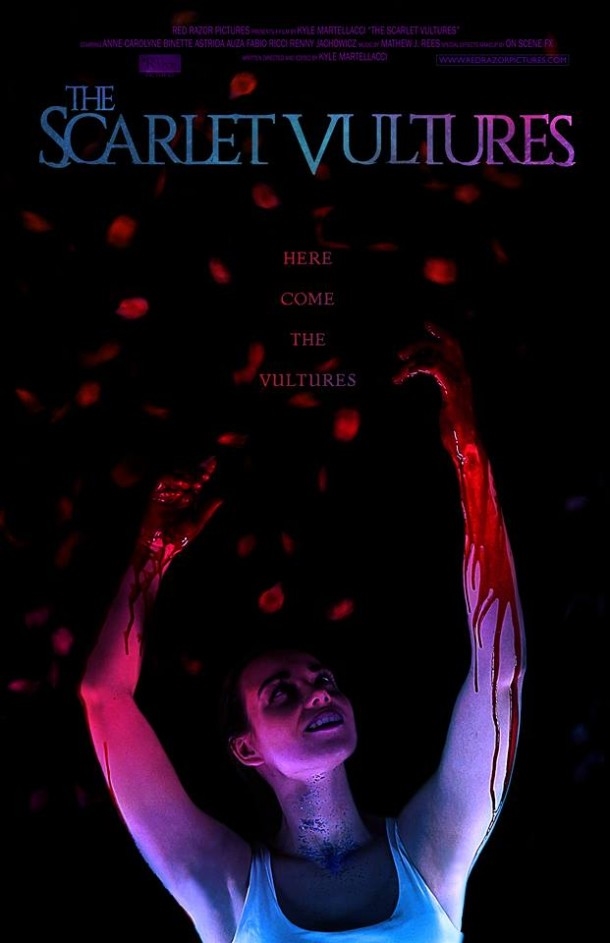 We announced earlier this year that Kyle Martellacci was working on his latest horror short The Scarlet Vultures. Since that time, though, the film has not only been completed but it is set to have its world premiere at the GenreBlast film festival this September 1st, and we recently got a chance to check out the short horror film.

The film follows Evelyn (Anne-Carolyne Binette), who appears to be dealing with the loss of her sister Delilah, but gets through the day and taking her mind off of things by baking and cooking. However, one day she cuts her hand quite severely and droplets emanate into her baking mix, but instead of throwing the batch away and starting all over, Evelyn decides to mix in her blood, bake it and proceed’s to serve it to her friends and boyfriend.

The result is astounding. Everyone adores her baked goods and she also senses that she is accepted. People want to be with her, a sort of belonging.

But then things take a sinister turn when Evelyn tries to alter the recipe by adding a different ingredient and things just aren’t the same.

You’ll have to excuse my vague description as explaining anything else will simply give the film away. Instead, The Scarlet Vultures is a slow burn, but highly engaging and quite eye-opening short film. The self-harm aspects are true. Someone I love used to self-harm and they told me that the self inflicting pain didn’t actually hurt, it was much more a release of the pain and The Scarlet Vultures captures that essence.

The visuals on display are great to look at, very stylish. And then there is the awesome performance of Anne-Carolyne Binette as Everlyn, who took the character and truly ran with it.

And of course the musical score. There’s a moment, albeit brief, but it reminded my of what Tangerine Dream did with The Keep. It was a short but sweet moment.

The Scarlet Vultures continues to cement Kyle Martellacci’s evolution as a filmmaker. It’s grown-up, detailed and thought-provoking. If you get a chance and you see this one on the festival circuit, do yourselves a favor and take a peek.