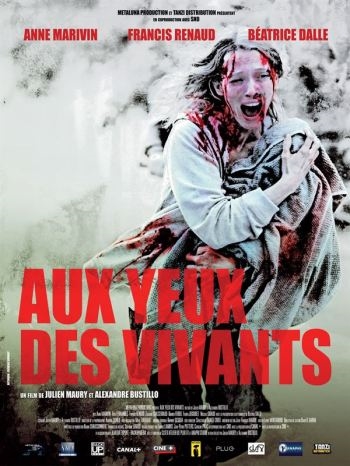 Stand By Me Storyline In Fright-filled Among The Living We have covered this titled for about a year now, and Among The Living is finally finishing it’s film festival circuit this year (still has the Swedish Lund Fantastisk Film Festival to go), we’re hoping it will have a video or limited theatrical release soon. The creators boast that this is made after French horror favorites Inside and Livide. Now Maury and Bustillo pair up again for a horror-thriller at the cross roads between Stand by Me and Friday the 13th. If you don’t know, the writer/director team gave us a new take on the vampire sub-genre with Livide. Now they’re experimenting with a horror version of the popular coming-of-age movie this year with Among The Living.

The SND M6 Group entertainment company has got the 411 on the story here:

Youngsters, Victor, Dan and Tom skip school to wander around an abandoned movie set. They stumble upon a horrific vision: a woman in chains is dragged through the field by a man wearing a clown mask. The masked man catches a glimpse of the boys, who scramble to run away. But, before they can escape, they see something which has been hidden for years, something they were not meant to see. Terrified of having been seen by the masked man, the boys try to alert the police. Unfortunately, their past record of unruly behaviour discredits them and the police do not follow up on their tipoff. That night someone breaks into their homes, seeking to eliminate them…one after another… They are going to meet Klarence…

This title, although officially cut, edited and screened pretty much during all of 2014, will hopefully finally hit the VOD, DVD or limited theatrical circuit by next year. At least I hope. The gorgeous photography and a warm palette (as far are the color treatment for the film) is highlighted in the trailer, but you can let us know what you think.