Adam R. Steigert Wrestles with a Werewolf as ‘Fang’ Goes into Production

There isn’t much that gets me excited, but when ever I read the word “werewolf” my ears most definitely stick up. However, I may just implode as it only gets better. Adam R. Steigert (A Grim Becoming, STAR) is currently in production on his latest flick Fang, a werewolf film which is set to star horror icon and total babe Melantha Blackthorne! She is also joined by a stellar cast which includes Jennie Russo, Michael O’Hear, Jason John Beebe, Melodie Roehrig, and Theo Maefs. Below we have a behind-the-scenes look at one of the bloody props as well as an early still from the film.

A.R.S. films in association with DefTone Pictures Studios Inc, has released its first official framed shot from the production of FANG along with a bloody prop! After participating in a robbery turned murder, Chloe (Melodie Roehrig) and Joe (Theo Maefs) decided to hide out at a distant relative’s house only to find themselves stalked and hunted by creatures and forces unknown.

Director Adam R Steigert (A Grim Becoming, STAR [Space Traveling Alien Reject]) has reunited with A Grim Becoming star and horror icon Melantha Blackthorne to bring a new version of terror. Director Adam R Steigert has been known for his unique methods of storytelling and has been promising a hardcore horror film for years. In 2018 he will make good on that promise as he embarks on a horror film (featuring a werewolf) called FANG. In addition to horror icon Melantha Blackthorne signing on to play Doris as the story’s lead antagonist, Steigert has brought in Jennie Russo from Ron Bonk’s “She Kills” (Shelly) and will reunite with Michael O’Hear (Return to Nuke ‘Em High Volume 1 & Johnny Gruesome) as well as Jason John Beebe (Sharknado 2: The Second One & Ombis: Alien Invasion).

Take a peek at the bloody carnage below as well as a sneak peek at the werewolf. Are you ready for a werewolf film with some bloody practical effects? I know I am, and I’m eager to see just how terrifying the werewolf will be. 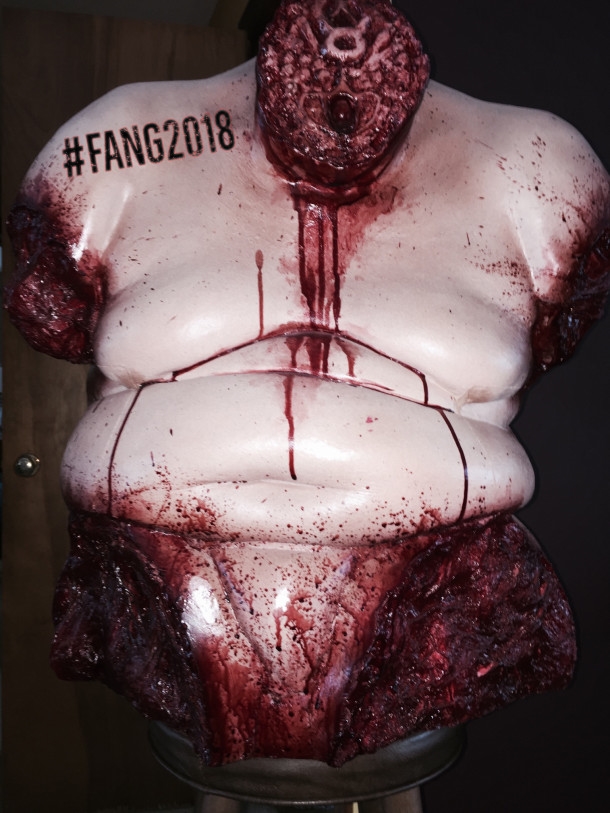