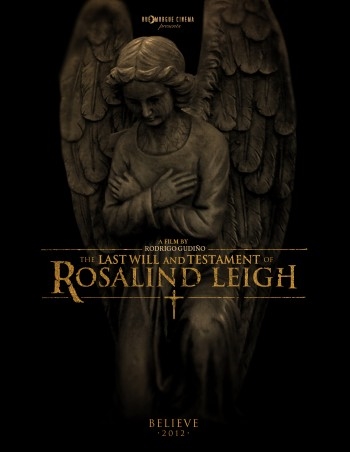 Review: The Last Will and Testament of Rosalind Leigh

In a world where horror movies tend to be ugly, devoid of color and lacking any visual appeal beyond boobs and blood; The Last Will and Testament of Rosalind Leigh is a breath of fresh air that captures the eye with beautiful layers of imagery. However, is Rosalind Leigh all show and no go? Read on to find out!

The Last Will and Testament of Rosalind Leigh is the first feature length film by director Rodrigo Gudino who also handled the writing duties. The film follows Leon (Aaron Poole), a young antiques collector, who returns to his estranged mother’s home after her passing. Inevitably the night grows dark and Leon soon suspects he might not be alone in the house.

Rosalind Leigh is part ghost story and part psychological thriller, straddling the line between the two elements it manages to tell a tale that keeps you guessing. Is Leon crazy? Are there ghosts and demons running amok? The film deftly maneuvers between the two ideas and leaves you wondering up until the very end.

How these ideas are conveyed is also something that should be commended. While Leon is our main character, he actually has very little to say throughout the film. Instead we get the meat of our story from a narrator. At first it’s a little off putting because so much of the story is told this way, but as the film plays out the reason for the narrator becomes clear and even adds a sort of depth to the story. By the time the film hits its climax, the narration comes full-circle in a way that is impactful for the viewer.

It should also be mentioned that Leon is primarily the only character we see on screen. This leads to long moments of quiet solitude where Aaron Poole must convey a lot of emotion and depth without really saying anything at all. It would be a challenging role for any actor, but Aaron manages to pull it off. He makes Leon a sympathetic individual by displaying a lot of vulnerability in key scenes. It’s the kind of thing that’s so small and seemingly insignificant, but if it hadn’t been there the audience would be completely disconnected from the character.

I touched on this in the beginning, but I just want to reiterate how beautiful this film is. When Leon first enters the house in the daytime, it’s aesthetically pleasing. Everywhere Leon looks, there are statuettes of angels and naturalistic decorations that make it look like the outside is bleeding in. It’s a beautiful mess that makes sense when you consider the state of mind Leon’s mother was in.

However, when it becomes dark, all of these beautiful and serene images take on a menacing shape as their shadows and silhouettes in the background make you constantly think you’re seeing things that aren’t there. It’s a clever way of bringing the audience into Leon’s state of mind. Is there really something in the darkness? Or is it your imagination?

The lighting is also done in a way that helps to not only enhance the story, but make the film visually appealing. Deep shadows and whitewashed tones serve to create stark contrasts that highlight underlying themes in the story and create visual tension. It’s also not overly used, so when these scenes pop up it immediately grabs your attention.

I should warn you, if you’re looking for intense scares you won’t find them here. Rosalind Leigh is chilling and provides a few jump scares, but what it does best is make you feel uneasy. This isn’t the kind of movie that’ll keep you up all night thinking about the boogeyman under the bed. Instead, you might be up thinking about the bitter reality of loneliness and regret. It’s the sort of movie that plays on real emotional fears that we all have, but utilizes abstract terrors to invoke those feelings.

The Last Will and Testament of Rosalind Leigh is a quiet piece of horror that says a lot about human relationships. If you like your horror to be more subtle and personal rather than brutal and violent, this film is for you.

Release: Nationwide in Canada on May 9th